Anita Hill says she would work with Joe Biden 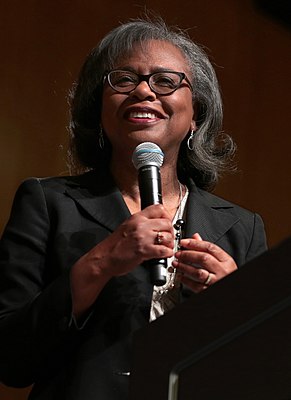 Anita Hill never pictured herself voting for Joe Biden. But given the political reality the nation is facing, she’s not only going to vote for Biden — she’s also willing to work with him, should he become president.

NEW: Anita Hill vows to vote for Joe Biden and will work with him on gender issues if he becomes president https://t.co/Milqx917Ja pic.twitter.com/WMwcLsH1Ax

NEW: Anita Hill vows to vote for Joe Biden and work with him on gender issues (via @AnnParks) https://t.co/fQsDtEnoTw

Anita Faye Hill (born July 30, 1956) is an American lawyer and academic. She is a university professor of social policy, law, and women’s studies at Brandeis University and a faculty member of the university’s Heller School for Social Policy and Management. She became a national figure in 1991 when she accused U.S. Supreme Court nominee Clarence Thomas, her supervisor at the United States Department of Education and the Equal Employment Opportunity Commission, of sexual harassment. – READ MORE »