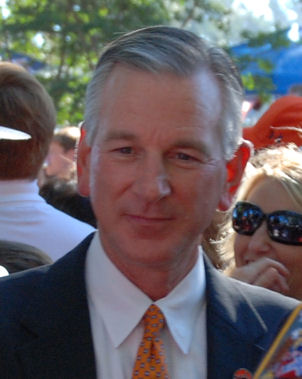 Former Auburn University football coach Tommy Tuberville defeated former Attorney General Jeff Sessions in Alabama’s Republican primary runoff election on Tuesday, setting up a November match against current Democratic Sen. Doug Jones, who became the first Democrat to win a Senate seat in the state since 1992 when he defeated Roy Moore, who has been accused of child molestation, in a 2017 special election.

In a state Donald Trump won handily in 2016, Tuberville is favored to win in November.

Tuberville has never served in elected office (and moved to Alabama only two years ago), and his campaign against Sessions was largely based on his support for the president. Trump endorsed Tuberville in March, tweeting, “Tommy was a terrific head football coach at Auburn University. He is a REAL LEADER who will never let MAGA/KAG, or our Country, down!” On a Monday call with Alabama voters, Trump said of Tuberville, “He’s going to have a cold, direct line into my office. That I can tell you.”

Thomas Hawley Tuberville (; born September 18, 1954) is a former American football coach, former player, and the 2020 Republican U.S. Senate from Alabama. Tuberville was the head football coach at the University of Mississippi from 1995 to 1998, Auburn University from 1999 to 2008, Texas Tech University from 2010 to 2012, and the University of Cincinnati from 2013 to 2016.
Tuberville received the 2004 Walter Camp and Bear Bryant Coach of the Year awards after Auburn’s 13–0 season, in which Auburn won the Southeastern Conference title and the Sugar Bowl but was left out of the BCS National Championship Game. He earned his 100th career win on October 6, 2007, a 35–7 victory over Vanderbilt. He is the only coach in Auburn football history to beat in-state rival Alabama six consecutive times.
In 2015, Tuberville was the president of the American Football Coaches Association. During 2017, he worked for ESPN as a color analyst for their college football coverage. Since April 2019, he has been a candidate in the 2020 United States Senate election in Alabama. On July 14, 2020, Tuberville defeated Jeff Sessions in the Alabama GOP Senate primary. – READ MORE »