NPR’s Ari Shapiro speaks with Olivia Troye, a former aide to Vice President Pence. She says that President Trump’s pandemic response is a failure and that she will vote for Joe Biden.

Booker Prize Is Rescheduled to Make Way for Obama’s Memoir

During one busy week in November, the former presidentâs new book is expected to come out, and top prizes from the Booker and the National Book Awards will be announced. 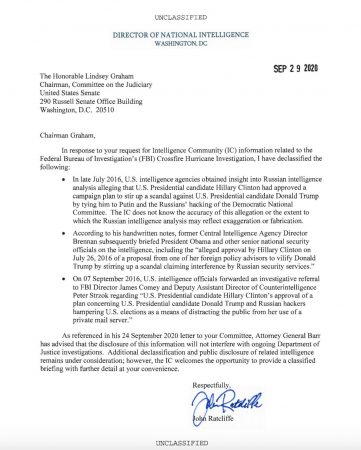 According to handwritten notes, Brennan briefed Obama on Hillary’s approval of a proposal to attack Trump in the 2016 election by tying him to Putin. See below of letter from Senator Lindsey Graham. John Owen Brennan is a former American intelligence officer who served as the Director of the Central Intelligence Agency from March 2013 to January 2017.

WINSTON-SALEM, N.C. (AP) — North Carolina caps outdoor gatherings at 50 people to prevent the spread of the novel coronavirus, but don’t tell that to President Donald Trump. He basked in a largely…