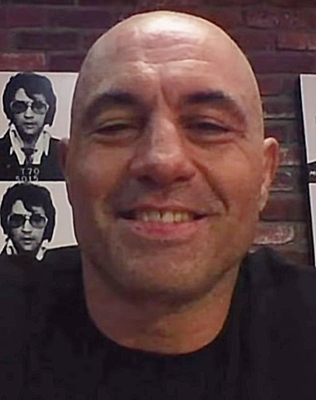 The UFC commentator and MMA enthusiast wasn’t done with outlining his pretty rational-sounding defense of getting out of LA.

He pointed out the fact that driving in Southern California is hell due to traffic and that the state is bogged down in “economic despair.”

Joseph James Rogan (born August 11, 1967) is an American comedian, podcast host, and mixed martial arts color commentator. He has also worked as a television host and an actor.
Rogan began his career in comedy in August 1988 in the Boston area. After relocating to Los Angeles in 1994, he signed an exclusive developmental deal with Disney, and appeared as an actor on several television shows including Hardball and NewsRadio. In 1997, he started working for the Ultimate Fighting Championship (UFC) as an interviewer and color commentator. Rogan released his first comedy special in 2000. In 2001, he put his comedy career on hold after becoming the host of Fear Factor, and resumed his stand-up career shortly after the show’s end in 2006. In 2009, Rogan launched his podcast The Joe Rogan Experience, which led him to – READ MORE »