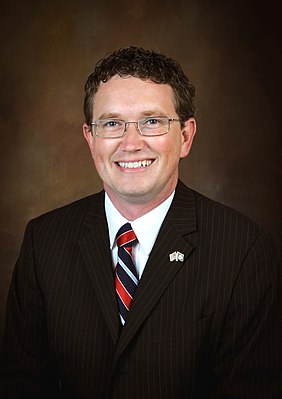 Massie, a libertarian-minded maverick who often clashes with GOP leaders, was renominated for a sixth House term. Trump savaged Massie in March as a “disaster for America.”

Thomas Harold Massie (born January 13, 1971) is an American Republican politician who has been the United States Representative for Kentucky’s 4th congressional district since 2012.
In 2012, Massie defeated Bill Adkins in the special and general elections to represent Northern Kentucky in the House of Representatives. Before joining congress, Massie was Judge-Executive of Lewis County, Kentucky, from 2011 to 2012. He also ran a start-up company based in Massachusetts, where he previously studied at MIT.Massie has been described as a libertarian Republican and is associated with the House Liberty Caucus of Tea Party Republicans.